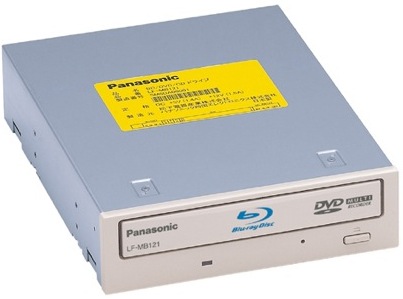 Panasonic just announced that they will be shipping their LF-MB121JD Blu-ray Disc drive for PCs (not to be confused with their DMP-BD10 player expected in September) in OEM, regular, and slimline slot-loading form factors, starting 10 June with support for 13 BD / DVD / CD formats. The drive delivers on both 25GB and dual-layer 50GB Blu-ray discs allowing you to write at 2x (72Mbps) speeds to both BD-R / RE formats via a suite of bundled software. It also features 8x write speeds to both DVD±R and DVD RW, 4x to DVD±R DL, 6x to DVD-RW, 5x to DVD-RAM, 24x to CD-R and 16x to CD-RW. Pretty much the same unit (and may well be) as the BenQ BW1000, but superior to both the Samsung SH-B022 (which can read but not write to DVD and CD formats) and the Pioneer BDR-101A which, oddly, the last time we looked, didn't support CDs at all. Panasonic also announced their 25GB and 50GB 2x discs which will hit the shelves starting April 28 just in time to prime the pump a bit.

At this Moment we don't know about these units price. But We'll try to update you ASAP.