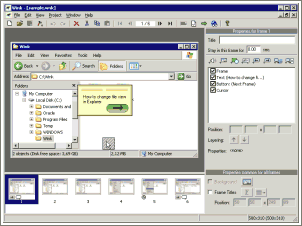 Wink is a Tutorial and Presentation creation software, primarily aimed at creating tutorials on how to use software (like a tutor for MS-Word/Excel etc). Using Wink you can capture screenshots, add explanations boxes, buttons, titles etc and generate a highly effective tutorial for your users. Here is a sample Flash tutorial created by Wink.

Capturing screenshots, mouse movements and specifying your own explanations with them. And all this in a standard Windows-based UI with drag-and-drop editing makes it very easy to create high quality tutorials/documentation.

t is estimated that Macromedia Flash Player is installed in more than 90% of the PCs. Using Wink you can create content viewable across the web in all these users' desktops. Similar applications sell for hundreds of dollars, while Wink is free with unrivaled features. So spread the word about Wink to your friends.

Freeware: Distributed as freeware for business or personal use. However if you want to redistribute Wink, you need to get permission from the author.

Cross-Platform: Available for all flavours of Windows and various versions of Linux (x86 only).

Audio: Record voice as you create the tutorial for explaining better.

Input formats: Capture screenshots from your PC, or use images in BMP/JPG/PNG/TIFF/GIF formats.

Output formats: Macromedia Flash, Standalone EXE, PDF, PostScript, HTML or any of the above image formats. Use Flash/html for the web, EXE for distributing to PC users and PDF for printable manuals.

Smart Capture Tools: Capture screenshots automatically as you use your PC, based on mouse and keyboard input (great time saver and generates professional captures).

Notes for Wink on Linux:

Wink requires GTK 2.4 or higher. The installer does not create any links/shortcuts. If you want shortcuts you will have to create them yourself. For a list of known issues in the linux version, view the readme.txt file in the wink directory after installation.
If the NumLock key is switched on, hotkeys in Wink do not work under Linux. So make sure to turn off the NumLock key while capturing.