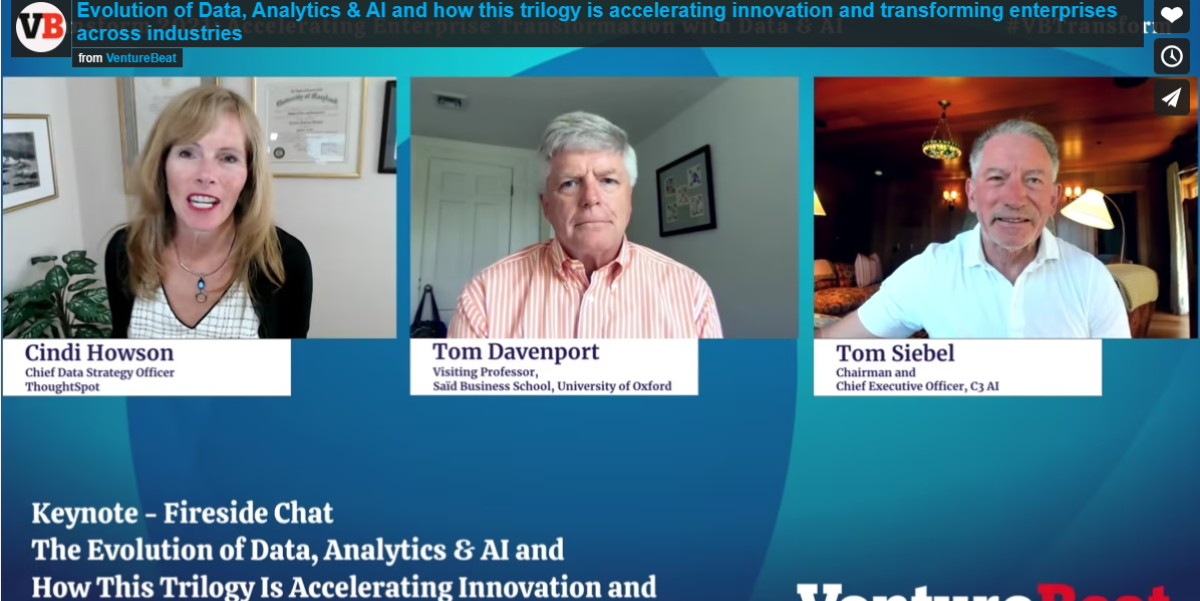 Technology industry veterans Tom Davenport and Tom Seibel have seen firsthand how data, analytics and artificial intelligence have changed business models over the past three decades.

In a conversation with ThoughtSpot Chief Data Strategy Officer Cindi Howson at VentureBeatâ€™s Transform 2021 conference on Tuesday, Davenport and Siebel shared their insights into how technology has boosted innovation and how it can transform industries, as well as the dangers it presents.

Davenport said the biggest change heâ€™s seen in his career has been the democratization of technology.

â€œThereâ€™s been a continual move toward the software being easier to use, and being able to do more things on its own â€” automated analytics, automated data science, automated machine learning,â€ Davenport said. â€œI think weâ€™re poised for even more democratization, which is great. I think overall thereâ€™s some issues that it raises, but it really opens up this field to a lot more people who may not have been nerdy enough to study statistics and get into the details of how you create various models.â€

Siebel said itâ€™s difficult to overestimate the impact of the cloud.

â€œComputing used to be expensive. Storage is something we used to move in and out of machinery with a forklift, he said.

Now, infinite computing capacity and storage are essentially free. And that has allowed startups to grow quickly and compete with more established firms.

â€œThey donâ€™t have to build a big IT infrastructure, they can get it pretty much all from the cloud,â€ Siebel said.

Technologies like cloud computing and predictive analytics have enabled classes of applications that solve problems that were previously unsolvable, Siebel said.

â€œWe have large banks, the oil and gas companies, Department of Defense, Food and Drug Administration, travel, transportation companies, all kind of reinventing themselves using predictive analytics to fundamentally change the way that they manage their businesses and deal with customers,â€ Siebel said.

Despite its benefits, AI has some pitfalls, Howson noted. In 2020, for instance, some felt like their models did not help predict the future.

Davenport attributed this to the slow pace in which humans and organizational culture improve.

â€œParticularly in these legacy companies, we havenâ€™t made much progress in becoming more data-driven in how we make decisions,â€ Davenport said. â€œThereâ€™s still a lot in organizations, conservatism, failure to experiment with new technologies and new approaches, to analyzing and understanding data. So that to me is the big problem.â€

Siebel, who believes the largest commercial application of AI will be in precision medicine, said we can build machine learning models that can do meaningful things like disease prediction. But health care providers via the state or private enterprise can misuse that data, he said.

He described the privacy and ethical implications of AI â€œvery troubling.â€