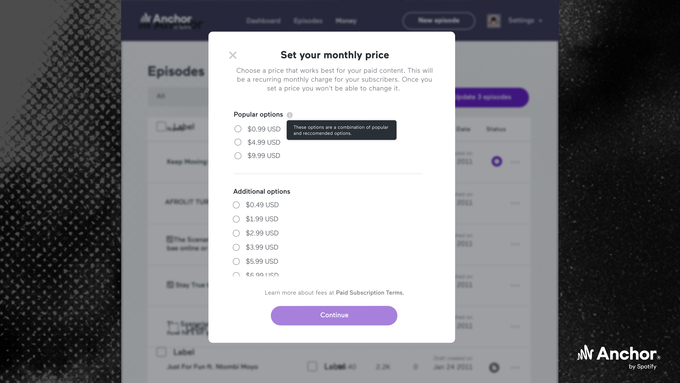 Spotify today is opening access to Podcast Subscriptions to all podcast creators in the U.S., after first launching the service for testing with a smaller number of creators back in April. Through Spotifyâ€™s podcast creation tool Anchor, podcasters of all sizes will now be able to mark select episodes as subscriber-only content, then publish them to Spotify and other platforms. Since launch, more than 100 podcasts have adopted subscriptions, Spotify says. Based on the early feedback from these creators, the company is now making a couple of key changes to both pricing and functionality as the service becomes more broadly available.

Before, creators could choose between one of three price points: either $2.99, $4.99 or $7.99 per month. Creators were able to choose which price point made the most sense for their audience.

But the company learned that creators wanted even more flexibility in pricing, which is why itâ€™s now expanding the number of price points to 20 options, starting as low as $0.49 and then increasing all the way up to $150.

Spotify explained that its research found that creators wanted some sense of where to start with pricing, rather than offering a completely open-ended system. Thatâ€™s why the pricing isnâ€™t something creators today manually enter. Going forward, Spotify will show the three price points that tested well â€” $0.99, $4.99 and $9.99 â€” before listing the other 17 options. Of those three, the company told us $4.99 was the best performing.

In addition to the ability to set pricing and gain access to a private RSS feed that can be used by listeners who prefer using a different podcast app, Spotify will now offer podcast creators the ability to download a list of contact addresses for their subscribers. This allows them to further engage with their subscriber base to offer them more benefits, the company notes. It could also be a selling point for creators who would otherwise not want to get on board with a paid subscription offering like this, if it meant losing out on a more direct relationship with their customer. 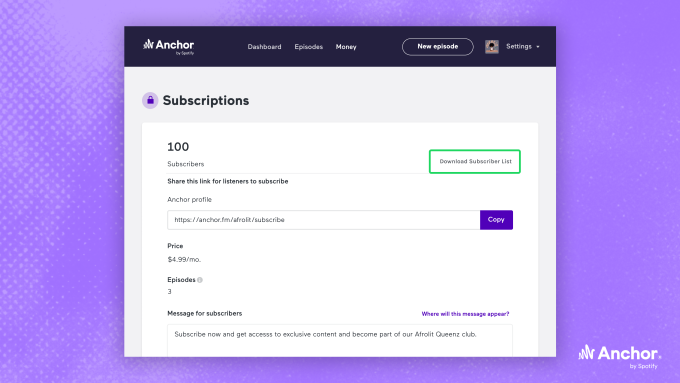 Spotify is not the only service offering paid podcasts. Apple recently announced its own podcast subscription platform. But Spotifyâ€™s is currently the more affordable of the two. Apple will take a 30% cut from podcast revenue in year one, dropping to 15% in year two â€” similar to other subscription apps. Spotify, meanwhile, is keeping its program free for the next two years, meaning that creators keep 100% of revenues until 2023. After that, Spotify plans to take just a 5% cut of subscription revenues.

With this first step into a marketplace model, itâ€™s notable to see Spotify â€” a staunch Apple critic in the antitrust fight â€” taking such a small percentage of creator revenues. Spotify has argued for years that Appleâ€™s cut of Spotifyâ€™s own subscription business is an anticompetitive practice, especially since Apple is a business rival via its subscription-based Apple Music service, and now, its podcast subscriptions, too.

Today, Spotify hosts a number of subscription-based podcasts, including bigger names like NPR (which is on Appleâ€™s paid podcasts service, too), as well as independent creators like Betches U Up?, Cultivating H.E.R. Space and Mindful in Minutes. Creators who choose to work with Spotify arenâ€™t locked in â€” they can share private RSS fees with their customers and publish to other platforms, like Apple Podcasts.

Appleâ€™s subscription podcast service works a bit differently, as creators can offer subscriptions to individual shows or groups of shows called â€œchannels,â€ or even freemium access. However, creators on Appleâ€™s platform collect customer emails through links in the show notes, which open in-app. Spotify creators, by comparison, redirect subscribers to subscribe to their shows via URLs provided inside the Spotify app. On the resulting webpage, listeners can sign up and provide their email.

The news of Spotifyâ€™s broader launch for Podcast Subscriptions follows a growing chorus of complaints from podcasters that Appleâ€™s own subscriptions service is off to a rough start. A report from The Verge documented creatorsâ€™ complaints about bugs, confusing user interfaces, interoperability issues and more. In the meantime, Spotify claims its waitlist for creators interested in its podcast subscriptions had â€œthousandsâ€ of sign-ups.