If a single $1 chip isnâ€™t available, it could hold up the shipment and sale of a device, appliance, or vehicle worth much more, according to a new report by accounting and consulting firm Deloitte.

With the COVID-19 pandemic and the spike in demand in the recovery, the semiconductor industry has seen one of its longest shortages, from the spring of 2020 through the fall of 2021. Deloitte expects it will last at least through 2022, pushing the lead times out for the shipment of some components into 2023.

The impact is still being felt across PCs, smartphones, datacenters, game consoles, other consumer goods, and especially the auto sector. The cumulative revenue impact of the shortage will likely be over $500 billion in lost sales globally from 2020 to 2022.

The next semiconductor shortage could be as big or bigger than this one. Given the ever-increasing importance of chips to multipleÂ  industries, the economic harm could be even greater, the firm said. So it did a study on what semiconductor manufacturers, distributors, customers (the semiconductor supply chain), and governments can do to avert another potential catastrophe. The problem is so big that no single company, or even industry, can make a difference on its own.

Some might think that todayâ€™s shortage is a one-time event. As long as we donâ€™t have a once-in-a-century global pandemic, a massive fire at a key Japanese chip plant, a Texas freeze, and a ship stuck in the Suez Canal â€” all coinciding â€” the next shortage couldnâ€™t possibly be as severe, right? 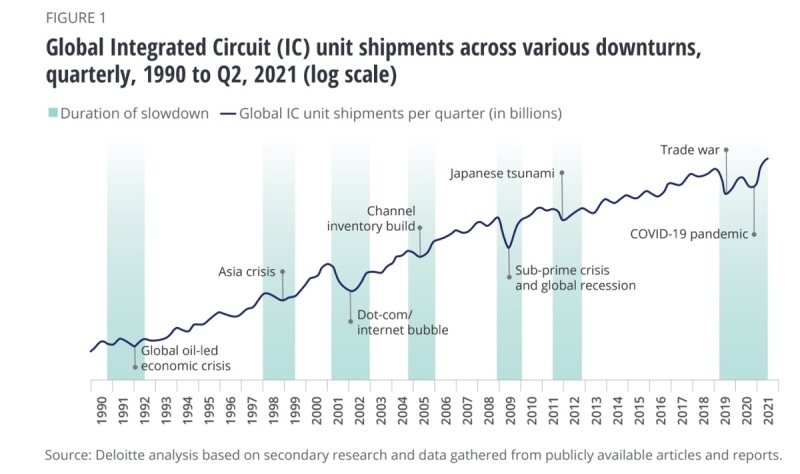 Above: The chip industry has seen a half-dozen dips and shortages over the decades.

But Deloitte said that in the coming decade, itâ€™s a near certainty that some combination of events such as a global recession, major weather event, and disruption near a critical maritime port or strait could all occur roughly at once. The chip manufacturing industry and supply chains, as they currently exist, inherently are vulnerable to disruptions, which makes shortage inevitable.

Over the past three decades, weâ€™ve seen six shortages of duration or magnitude similar to todayâ€™s. Sometimes shortages occur or are exacerbated by external shocks such as the tech bubble or 2009 recession, but sometimes they â€œjust happen.â€

Adding capacity in the chip industry has always been expensive and chunky. It occurs in waves driven by both technology and market forces and has long lead times between deciding to build a fab (or semiconductor fabrication plant) and that fab producing its first output (finished wafers). So, the real question is not if there will be another shortage, but when, and how severe?

Above: Solutions to the chip shortage.

The bullwhip is the seesaw of sales when supply and demand are out of sync due to poor communication in the supply chain.

All of the various players need to do all of their respective parts, work together, and at the same time not create a glut. Deloitte said the companies should choose a specific action or a combination of actions depending on what role they play in the broader semiconductor ecosystem and value chain.

The whole chip industry is committing toÂ increasing overall output capacity at an unprecedented level. Capital expenditures from the three largest players will likely exceed $200 billion from 2021 to 2023, and could reach $400 billion by 2025.

Governments have committed hundreds of billions more. Deloitte expects global wafer starts per month of 200-millimeter wafers (which are processed in chip factories and sliced into individual chips) to increase from about 20 million in 2020 to 30 million by the end of 2023.

Capacity will grow at both the 200mm and 300mm wafer size, at about the same rate for each. To be clear, growth in 200mm comes mainly from increasing capacity in existing fabs, rather than the construction of entirely new plants, which will account for nearly $12 billion of capital equipment spending between 2020 and 2022. 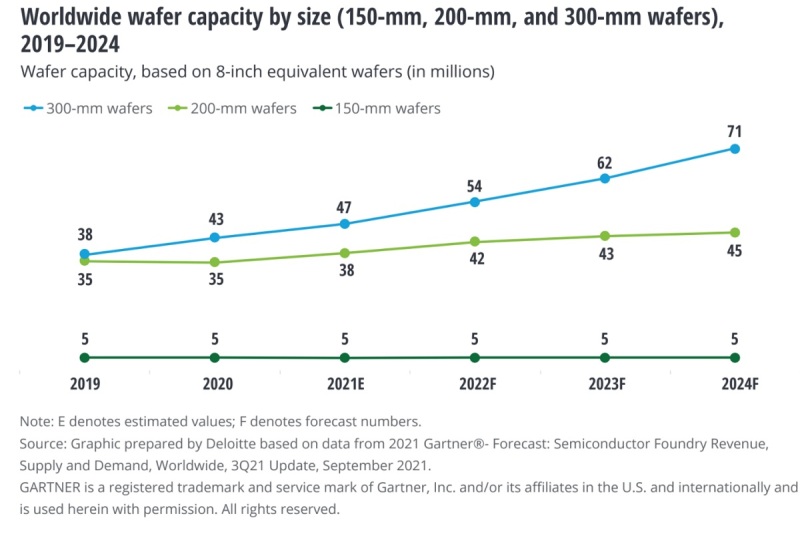 Above: Deloitteâ€™s capacity predictions for chips.

From a technology perspective, capacity at mainstream nodes and the more advanced 300mm process nodes (under 10nm, mainly at 3nm, 5nm, and 7nm â€” where nm refers to nanometers, or the width between circuits) will grow more rapidly than more mature process nodes. It is worth noting that demand is growing for both wafer sizes and at all process nodes, not just the most advanced.

Increasing capacity broadly by 50% in only three years will more than cover any future shortage, right? The answer is not so obvious.

On top of raising overall capacity, the chip industry should build local capacity. Chip manufacturing is geographically clustered and needs to be distributed across more regions. The 2020 level of concentration in East Asia (including Japan and China, which are nearing 60%) has attracted government attention from the United States, Europe, and China, and plans are already underway to build new plants in those countries or regions, as well as Israel, Singapore, and others. 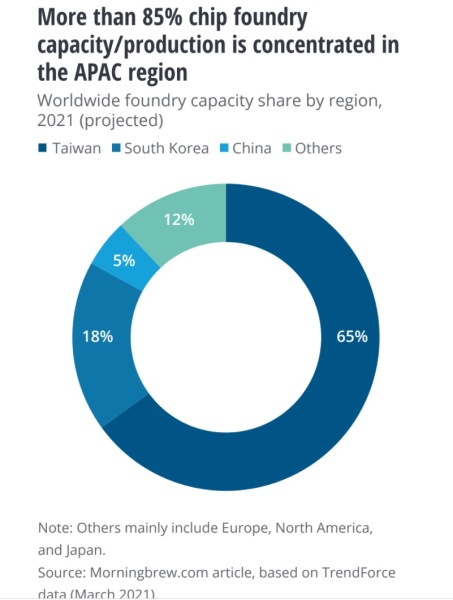 Above: The chip industry is concentrated in Taiwan and the rest of Asia.

Moving the needle on the geographical concentration of chip supply is hard. There are over 400 semiconductor manufacturing facilities globally, and there are announced plans to add 24 new 300mm fabs by 2022, but only 10 new 200mm fabs in the same period.

Some of those are in South Korea and the Taiwanese region. Adding a couple of dozen in new locations outside these clusters may help. Deloitte said that new locations will only cause concentration in East Asia to drop a few points, meaning it would still produce more than half of all chips by 2023.

The industry should also become strategically lean â€” chip buyers, distributors, and retailers need to determine which level of lean to choose. There is such a thing as too lean.

Breaking the bullwhip on the demand side is needed. Original equipment manufacturers (the system companies), distributors/suppliers, and customers are affected by the bullwhip effect where delayed communication between stakeholders at each tier in the supply chain is amplified by judgments placed on demand signals. This needs to change. 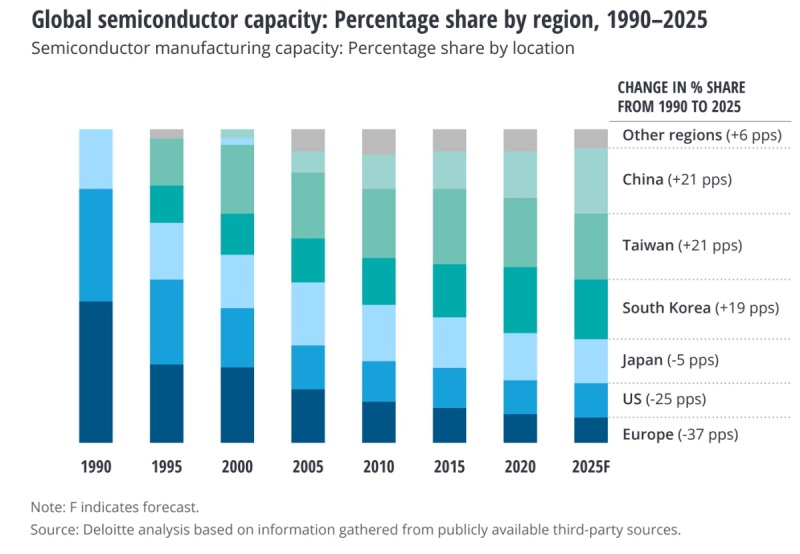 Above: The U.S. share of chip manufacturing has fallen over decades.

And Deloitte said that many manufacturers began digital transformations by the spring of 2021. Continued innovation is necessary to be more adaptive to future supply chain-driven business disruptions. All of this will require close communication.

Demand is growing roughly as quickly (or more) than planned capacity growth. Demand drivers include 5G, artificial intelligence and machine learning (AI/ML), intelligent edge, and internet of things (IoT). Some of these are about delivering increasingly powerful chips to products that already use a lot of chips, but some are about adding chips to products that had no chips before.