Companies continue to add apps to their technology stacks as the pandemic drives digital transformations. Itâ€™s estimated that by the end of 2021, 99% of organizations will be using one or more software-as-a-service (SaaS) solutions, with IT decision makers citing agility and scalability as the top motivators. According to Statista, the SaaS market is worth roughly $145.5 billion in the U.S. alone, with the average company spending hundreds of thousands of dollars on SaaS apps.

But according to an IDG survey, over 89% of organizations say that they currently have an app data integration backlog regardless of whether the integrations are handled in-house or with the help of third parties. The need for SaaS management solutions has fueled the growth of integration platform as a service (IPaaS), which standardize how apps are integrated into an organization. IPaaS can solve these challenges by synchronizing data and build automations between SaaS tools.

One of the platforms benefiting from the growth is San Mateo, California-based Celigo, a set of services designed to optimize end-to-end business automation for mid-market companies. Celigo delivers automationsÂ  that work across multiple cloud apps using embedded business logic developed from learnings across thousands of customer deployments, as well as tens of thousands of uniquely implemented processes.

Celigo was founded in 2011 by Jan Arendtsz, the former director of integration services at NetSuite, where he led a team that implemented various business process automation projects for end customers. From a small team working out of Arendtszâ€™s garage in Northern California, Celigo reached its first 100th employee and 800th active customer before taking any institutional capital.

â€œMany mid-market companies rapidly pivoted their business processes to take advantage of new market opportunities throughout the pandemic. Businesses were required to embrace digital transformation within the organizational structure to stay competitive with digitally native organizations. Companies that transitioned to using an IPaaS could successfully evolve their digital technology, people and processes to win against more established, better-funded competitors,â€ Arendtsz told VentureBeat via email. â€œCeligo has a vision for IPaaS that moves beyond integrations to fully automate business processes across the organization in the most optimal way.â€ 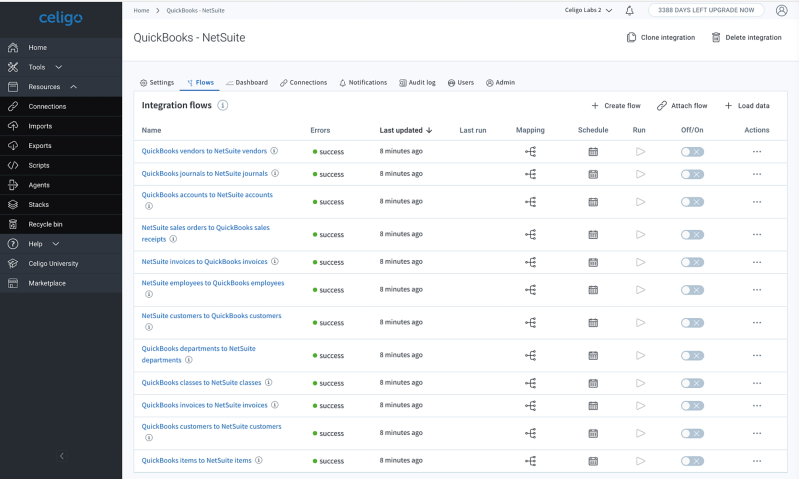 The Celigo platform allows IT teams to manage business process automations, error handling, and compliance with reporting and analytics through a dashboard while giving control of automated processes to the line of business group thatâ€™s closest to them. Machine learning algorithms are used to classify external API errors from apps such as Shopify, NetSuite, and Magento automatically. For example, using these algorithms, Celigo can categorize the many types of â€œservice unavailableâ€ API errors as â€œintermittent,â€ and then use a standard classification code to auto-apply a predefined recovery procedure.

Arendtsz points out that, with the explosion of business apps, thereâ€™s also been an explosion of data silos. Manual data processes lead to wasted time and costly errors across the organization, yet many companies havenâ€™t connected these apps quickly. Thatâ€™s where Celigo can help â€” at least potentially.

â€œ[Celigo] is designed for IT professionals and business users to connect [apps] to automate business processes. That means IT resources can be used where needed most while maintaining control over the overall process,â€ Arendtsz said. â€œAn IPaaS can help automate many of a companyâ€™s key business processes. Examples of some key processes that might be automated include quote-to-cash, order-to-cash, employee onboarding and offboarding, data warehousing, third-party fulfillment, and customer 360 use cases.â€

Celigo, which has nearly 500 employees, claims to have more than 4,000 customers and 36,000 users globally. Itâ€™s also flush with cash, having announced today that it closed a $48 million series C funding round led by OMERS Growth Equity with participation from NewSpring Capital. Celigoâ€™s total capital raised now stands at over $80 million.

But Celigo has well-financed competitors in Workato, Boomi, Tray.io, and Jitterbit (to name a few). In November, Workato raised $200 million at a $5.7 billion valuation to expand its enterprise process automation platform. Tray.io recently secured $50 million to further develop its software for automating repetitive business processes. And in May, Dell announced that it would sell Boomi â€” which it acquired in 2015 â€” to Francisco Partners and TPG Capital in a $4 billion deal.

â€œIn 2020, IPaaS demonstrated impressive growth of 38% to reach $3.5 billion to become the largest stand-alone integration market,â€ Gartner noted in a June 2021 report. â€œTechnology and service providers must view IPaaS as a strategic, fast-growing and high-performing market, which is set for increased competition and consolidation.â€