Whether you are in the same room or on another continent, multiplayer games can function as a means to bring people together. That said, nothing is quite like the experience of pushing figures around a board, rolling dice, and slaying evil with your friends. Thatâ€™s where VR games like Resolution Games award-winning Demeo shine. Winner of the VR Awards game of the year 2021, Demeo uses the sense of space given to you by VR headsets to create a feeling of closeness thatâ€™s hard to get otherwise.

However, with the cost of entry and technical requirements, VR isnâ€™t feasible for everyone. Fortunately, Resolution Games has a, well, resolution for this problem â€” Demeo: PC Edition.

â€œSince Demeo launched, we have more than doubled the size of the team dedicated to its ongoing development,â€ said Tommy Palm, CEO and founder of Resolution Games. â€œThe reception from players has been incredible â€” and with the PC Edition, weâ€™re looking forward to bringing an authentic tabletop experience to even more players. This is the real deal for desktop gamers, as weâ€™re completely rebuilding Demeo for a native PC experience â€” and we canâ€™t wait to welcome you into the world of Demeo.â€

Roots of Evil and beyond

The Demeo post-launch roadmap for 2022 shows several new features, including three new adventures. The first one, Roots of Evil, comes out today and tasks your party with taking on evil druids. However, you wonâ€™t have to do this alone as this update adds a fifth playable character class, the bard. Roots of Evil is available immediately as a free content update to current players. 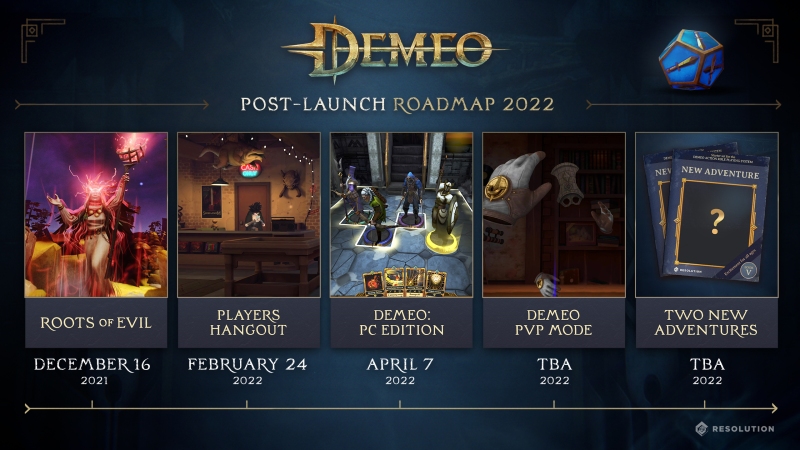 Beyond new adventures, the Players Hangout is expected in February and adds a social space for players to spend time together while not exploring the dungeon. The hangout will include ways to dress up your avatar as well as play minigames. One of the minigames is Hauntlet, designed by Doom co-creator and Resolution Games senior creative director Tom Hall.

â€œWith Demeo, we set out to make a game that rekindles that feeling of gathering around a table with friends to fight monsters and find gold,â€ added Palm. â€œThe gameâ€™s first year proved that we absolutely hit the mark. What really made those games fun in the long-term, though, was the promise of more content, more adventures and more ways to play. As we head into 2022, we recognize how beloved Demeo is and have made our most ambitious plans yet as a studio. This is a game weâ€™ll all be playing for years to come â€” and with the launch of Demeo: PC Edition in 2022, even more friends will be able to join the adventure.â€

For fans of competitive tabletop gaming, Demeo will also add PvP (player versus player) in 2022. The new mode will pit up to four players against each other in a duel for supremacy. Details and release dates for PvP mode and the two new adventures will be announced a bit down the road.